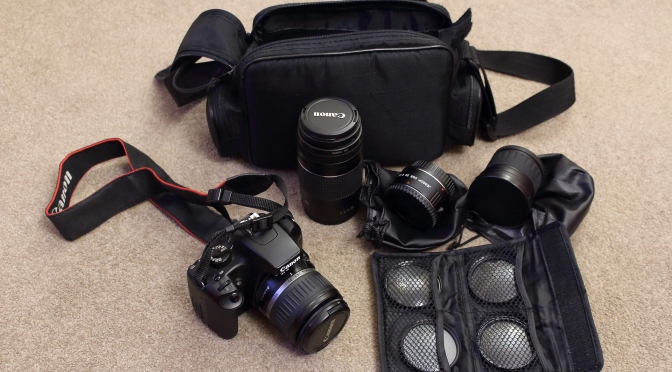 A friend of mine recently asked me the simple question: “What sort of camera should I buy?”

I looked at him a blankly and was initially very unhelpful.  Not deliberately, mind you.  It’s just that there are so many different types of camera out there, with different advantages and disadvantages, prices and sizes.  After a few minutes I managed to ask him what sort of photos he wanted to take, and what he wanted his camera for.

Now, I love a challenge, and I got to thinking about what sort of cameras you can use for everything – or at least what sort of camera you can use in the majority of situations.  Obviously, budget has to be a consideration, so I asked him how much money he had to spend, and he decided that about £200 was a good figure to settle on.

To a lot of people (me included!) £200 is a lot of money to lay out in one go, and a lot of people would never dream of spending so much on a camera (me not included). But as high-end professional cameras can be in the tens of thousands of pounds, clearly some compromises need to be made somewhere when coming up with our solution to “everything” for £200.

My first suggestion was therefore a bridge camera which tend to be “good all-rounders”. There are some very powerful options available for around £200 either used or new, with zooms in the 30x to 50x range.  (Particular favorites of mine would be the Fuji Finepix HS range, with manual focus and zoom rings, like a DSLR, but there are great options out there from all of the major camera manufacturers).

Nearly all of these new superzoom bridge cameras have DSLR-like controls for Aperture, Shutter Speed, ISO etc., and will come with an electronic viewfinder.  However, they tend to have smaller maximum apertures and smaller sensors, so they are not as good for beautiful soft, out-of-focus backgrounds and their lenses tend to struggle at long focal lengths in difficult lighting conditions.

But is there another option?  Is it even possible to get a DSLR, with a set of additional lenses, to give you the versatility of a bridge camera for the same price?

I should set some rules out for this challenge before I get it underway, because there are clearly going to be differences in the overall specifications and results achievable between  Bridge Cameras and second hand DSLRs, the point is, though, that the ultimate quality of the end image must be acceptable.  Here are my ground rules for the challenge:

Apologies to any Nikon fanatics out there – but I have plumped for Canon in this test for two reasons.  Second hand Canon gear tends to be a bit cheaper, and because I am a Canon user myself, I can vouch for how well the items mentioned here work.

The Lenses and adapters:

So, that gives us:

The kit has a focal range of 8.1mm to 600mm (technically a 74X magnification from widest angle to longest focal length) – and a 35mm equivalent range of 13mm to 960mm focal lengths.

But how much space does it take up? Does it fit in a bag?

But is it any good?

Well – I think it is!  A lot of this is equipment which I use pretty regularly in the tests throughout this site.  There are a number of macro images already online, so I won’t dwell on these – but the full extent of the 600mm zoom hasn’t been demonstrated before.  Sure, there is some chromatic aberration, but it would be much worse on a bridge camera:

Then at the extreme wide angle end things look like this – which is wider than can be achieved on a bridge camera without a similar converter:

Photography on a tiny budget

YOU MAY NOT DISTRIBUTE, COPY, PUBLISH OR USE THE IMAGES OR ANY PART OF THE IMAGES IN ANY WAY WITHOUT EXPRESS PERMISSION OF THE COPYRIGHT HOLDER. YOU MAY NOT ALTER, MANIPULATE, ANY PART OF AN IMAGE WITHOUT CONSENT.

Copyright (c) for all images remains with the photographer – Alex Denny as at the date of publication. All rights reserved.

Enquiries regarding use of and purchasing prints and image use rights must be directed to the Copyright holder.